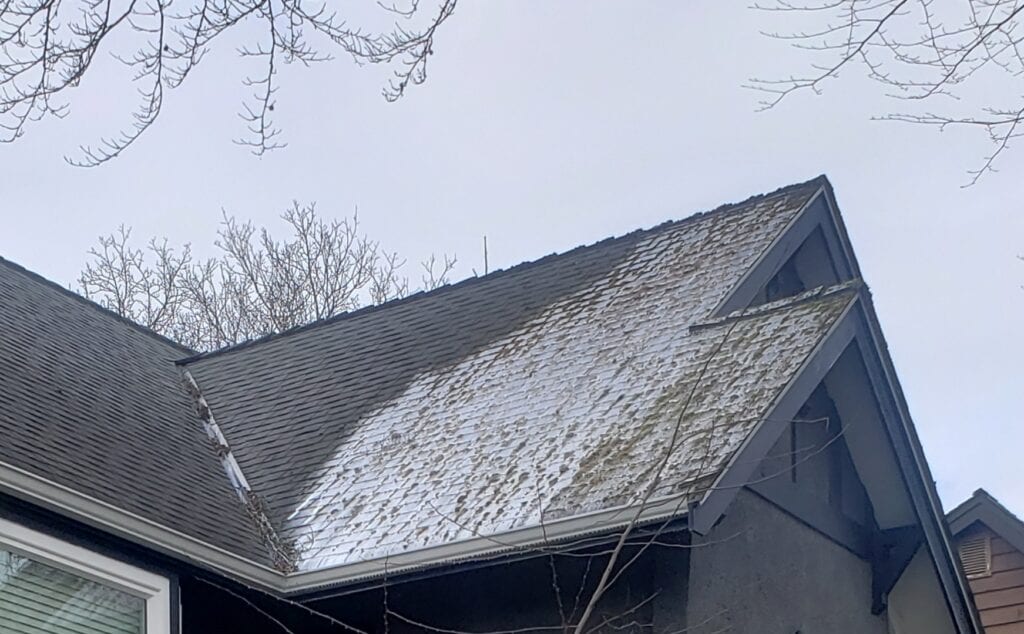 Soft washing is a cleaning method that uses a liquid cleaning solution to remove dirt, algae and other organic material from a building’s facade. The liquid cleaning solution is sprayed on the building using low-pressure pumps and then left to react. After several minutes the solution breaks up any contaminants on the building and is later washed off using water and mechanical agitation (aka brushes). The entire process uses low-pressure and thus avoids many of the problems associated with pressure washing.

But what is this magic cleaning solution and is it safe for the environment?

The natural question that follows is, if the cleaner breaks up algae and other organic material, is it safe for the environment? The short answer is “yes, if it’s used correctly.”

The soft-washing process uses Sodium Hypochlorite (household bleach) mixed with tap water and a small amount of purpose designed surfactant or foaming agent (Apple Wash.) Despite the perception that household bleach is dangerous, it is actually quite safe and can even be considered environmentally friendly if used correctly. According to Environmental Science and Engineering Magazine, “an extensive review of the literature has been undertaken by many investigators and the conclusions drawn are that sodium hypochlorite is safe for humans and the environment.“

Sodium Hypochlorite (NaClO) is an oxidizer frequently used to disinfect municipal drinking water supplies. Chemically it is essentially table salt (NaCl) with one extra oxygen atom (O). This extra oxygen atom detaches easily and binds readily to other compounds, “oxidizing” them. When used properly, Sodium Hypochlorite is safe for the environment because it reacts quickly with organic material and rapidly breaks down into ordinary table salt (NaCl) oxygen and water before it can spread through the environment.

How do you use the cleaner is properly?

The key to making soft-washing effective and safe for the environment is “dwell time,” allowing the oxidizer enough time to fully react where you want it before washing it off. This way the product has done its job and broken down into its safe components before it is spread into the environment.

The Apple Wash surfactant helps with this in a couple of ways. First of all, it decreases the surface tension of the solution and allows it to foam. This allows the product to stay where you want it longer, think of it like shaving foam as opposed to straight water. Apple Wash also has a coloured marking agent in it, allowing technicians to see exactly where it has been applied, thus minimizing overspray. When mixed with sodium hypochlorite in the cleaning process this marking agent disappears in 1-3 minutes, depending on the strength of the Sodium Hypochlorite and how much Apple Wash is used. This serves as a built-in timer for dwell time, so that workers know when the product has fully reacted and is safe to rinse off. As long as it is given time to react on the surface of the building, the soft washing chemicals will only kill organisms where it is directly applied. Afterwords it turns into water, salt, oxygen and a trace mount of what is essentially biodegradable soap.

Your response has been sent